Becky Heineke has written a book!  And it is just as fantastic as you would think it would be.  Nay, strike that.  It's more fantastic.

I'm Stalking Jake! is an award-winning, generation-defining work encompassing celebrity adulation, internet addiction, and the modern perplexity of life after college.  PLUS, there are Fake Jakes and red pandas and full-grown adults acting like morons. It is the best book ever written about blogging about a moderately well-known, large-eyed actor.  Rated R for language and stalking.


From the back cover:

It was a standard-issue celebrity crush. 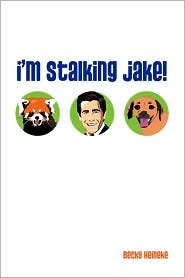 She was twenty-four, two years out of college, and had nothing better to do ... which is how she wound up joining a girl she'd never met to write a blog called Jake Watch.

Over the blog's nineteen-month run, there were movie premieres, a movie script, a legitimately stupid Internet rumor (accidental), one highly unsuccessful presidential campaign, a lost puggle, and a T-shirt business that may or may not have violated international copyright laws.

But Jake Watch also aged its two writers more than its life span might suggest. While countless books have been written about celebrities, blogs, and the impact of the Internet on our changing culture, there hasn't, until now, been a book that exemplifies their influence on the first generation to grow up obsessed with all three. I'm Stalking Jake! is a memoir unique to the age in which it was written, a comedy about the drama of growing up and reaching out in the era of Internet addiction and celebrity infatuation.

Learn more (maybe even more than you wanted to know)!